JJ slept the night through like a champ, and the next morning, we were up before he was.  Once he was awake, he wanted to stay in bed and play some games on his DS. 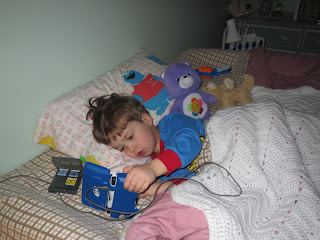 That was just fine with me.  I enjoyed a quiet cup of coffee while he played happily in the guest room.  I kept checking on him, but he said he would let me know when he wanted breakfast, so I let him be.

When I walked by the room about half hour later, I saw him sitting on the floor starkers!  When I asked him what he was doing, he informed me that he was getting dressed.  I asked him if he needed any help, but the answer was no.  He was four years old now, and he could do it himself...and he did!