My Mary Poppins bag of tricks

I was rummaging around the basement the other day looking for my Mary Poppins bag of tricks, and when I dumped it out on the floor, many happy memories tumbled out of the bag along with the toys. Oh joy! Yes, my Mary Poppins bag of tricks, has been put to good use over the years, and I thought it was time to dust it off, and let JJ get his hands on some of the treasures.

Many years ago I remember carting it up the street when I had to cover for Althegal, when she was held up at work, and couldn't get to her babysitting job on time. I would grab the bag of action figures, transformers, construct blocks, and various other favorite toys our girls played with over the years, and report for duty at the house of two small boys. I felt like Mary Poppins standing on the doorstep with my bag of tricks in hand. I didn't have the fabulous hat though...oh well! The boys eyes would light up when they saw me at the door with the toy bag in hand, and the fun would begin. Some toys belonged to the Thesha, but most of the toys were Althegal's favorites.

Whenever other babysitting duties arose, or friends came to visit with small children in tow, I would bring out the bag of toys, and it was always a big hit. Many many little munchkins have let their imaginations run wild whilst playing with the treasures within the bag, and I knew it was time to let JJ delve into the magic contents.

When he pulled out toy after toy, he followed the same path all the other children over the years had trod. The bag has many expensive robots and action figures in it, but every child always gravitated to the same three inexpensive plastic Power Ranger figures that Althegal bought at the bargain store. Here we see JJ with the black one. 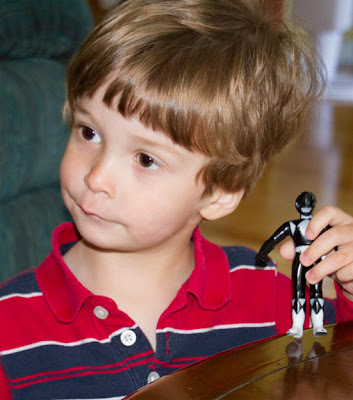 Now the red one joins the fight against the insect monster. 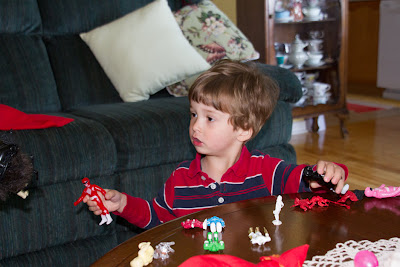 Oh my goodness, it is a battle royal. 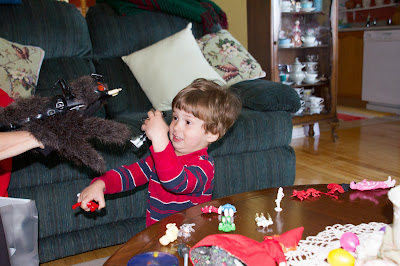 Time to retreat and think about another attack. 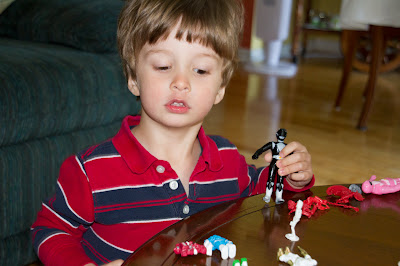 Now the red figure is engaging the Transformer that changes from a cassette deck into a robot. 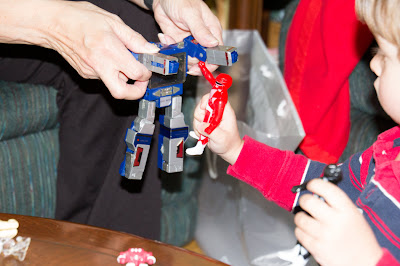 Then it is on to the truck that transforms into a robot. 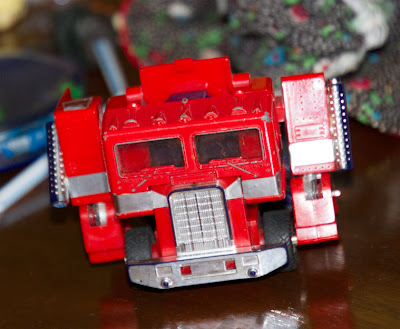 I'm not sure who had more fun the other day, JJ or Amma! Hmmm?

Hope this brings back some happy memories for you Althegal.
Posted by Cuppa at 6:45 AM