The kids love to play this game, but they don't have all the intricacies of game down yet. There are limited places for an adult to hide, so we play the game using Winnie-the-pooh. The kids have to cover their eyes while we hide Winnie, then we cover our eyes while they hide Winnie. Lots of times one of the kids will tell us outright where the other one has hidden the silly, willy, nilly ole bear, but they never tire of the game and we go round and round and round in the bear-hunt.

The other morning AC was covering his eyes in the living room while the kids headed down the hall towards the bedrooms to hide the bear. After counting to 10 AC shouted out "Ready or not, you must be caught" and went on the hunt for W-the-P. The last time he had hidden Winnie in the bedroom, he had put him behind the bedroom door.

He burst out laughing when he rounded the corner into the hall and saw the kids both standing in the bedroom trying to look nonchalant. 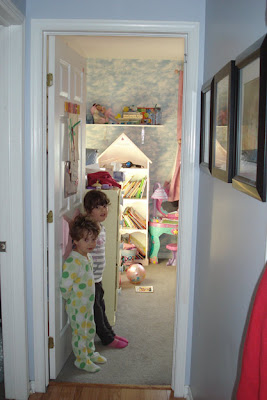 Where do you suppose they had hidden Winnie? 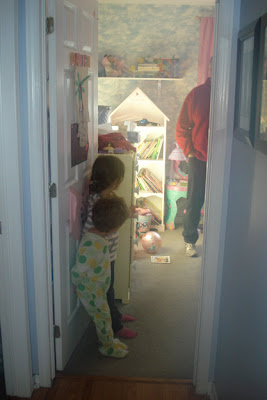 Yep, behind the bedroom door!
Posted by Cuppa at 6:04 AM

These two are priceless, made me smile seeing them standing by the door....:-)Hugs