Weekend with the Grands - cont'd

Saturday morning we were up earlier than normal because Smudge woke up with the sun and wanted all of us upan'atem' bright and early too. We had picked up the Jungle Book DVD at the library the day before and she quite enjoyed watching that while I made coffee and muffins and fussed with other breakfast items . She called the wolves dogs, marched around the living room when the elephants did their dawn patrol, danced with Baloo the Bear, laughed at the monkeys and watched Bagheera intently all the way through. AC and I found the movie entertaining too. Shere Khan was quite the British character and the vultures were hilarious.

We put in a fun morning with the Smudge and took her home after her nap. It was Wimbledon weekend and we wanted to watch the tennis matches that we had taped while Smudge was here. When we got her home we discovered that Mommy had been knocked flat with back spasms and needed help coping with her two little ones, so we packed up fresh clothes and invited Smudge to join us for another sleep over. She keeps us busy, but she is a delight to have, so over to our house she came again.

Here we are going for an after dinner walk. We didn't think she would walk very far so we took the stroller so she could ride when her little legs got tired. She didn't want any part of riding though. She helped me push the stroller - help being the operative word here, and even though she had to reach up as high as she could she pushed it for quite a long time. I had a heck of a time keeping the thing on the straight and narrow, but somehow we managed. 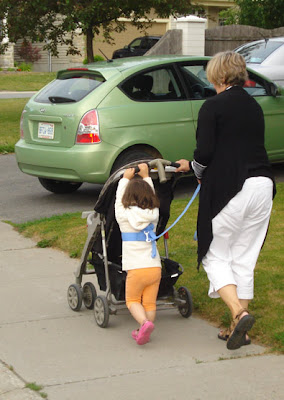 She did take a break from pushing from time to time, but I had her on a tight leash, so she couldn't go very far. 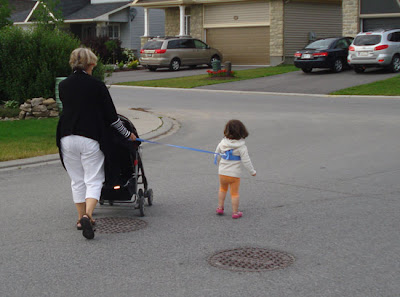 After our long walk, it was once again time for bed and another story with Buppa. 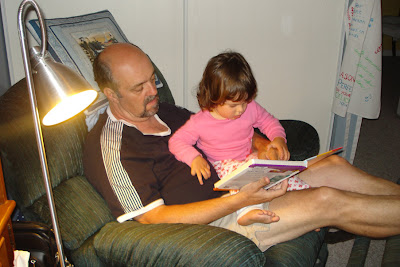 The next morning dawned sunny and bright, so we headed to the park. Smudge went straight to the swings, 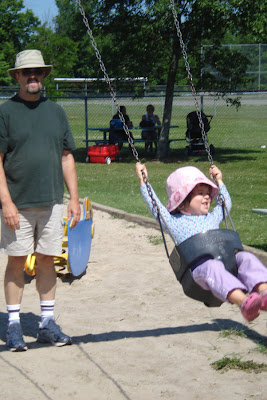 and then headed over to the climbing apparatus. Buppa had to help her get started, 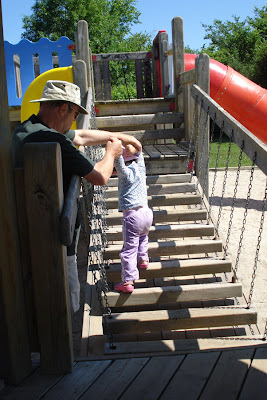 but soon she was doing just fine on her own. She figured out that she had firmer footing if she stepped between the swinging logs instead of on them. 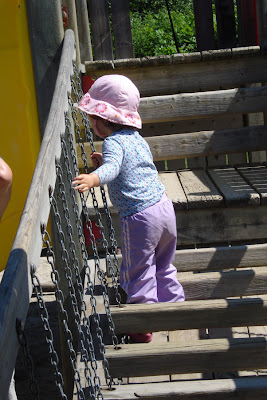 Such a smart girl she is. She made it to the top and was all set to climb even higher to get to the big slide. 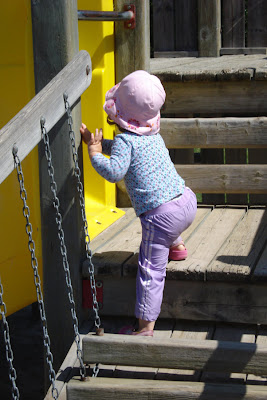 Buppa convinced her to come down the smaller slide though and once she was on the sandy ground her little feet scampered off towards the swings again. More pics tomorrow - stay tuned.
Posted by Cuppa at 6:21 AM