Oh my, the girl just conquers new mountains every day. Yesterday we spent almost all day outside in the sunshine and the kids played on the swings a lot. Jboy was in the baby seat and Smudge on the strap swing. She doesn't quite have the knack of pumping her legs though, so needs constant pushing. I place a lawn chair between the two swings and push and push and push. When it was time to give Jboy a stretch I placed him on this double-seat swing and Danica looked on from the strap-seat swing. I noticed that Jboy had a stinky diaper so took him in for a change and told Smudge I would be right back.

I was in the bedroom beside an open window changing Jboy when I heard Smudge calling out from the backyard
"Look at me Amma. I'm swinging high"
I looked out the window and there she was, indeed flying high, and doesn't she look proud of herself? 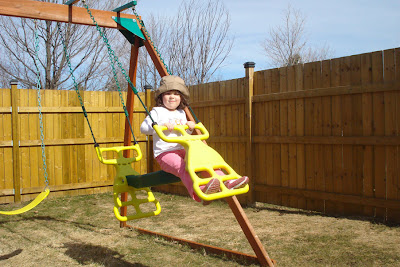 Yes, while I was in the house with Jboy, she climbed on the swing all by herself and soon got the hang of pumping it to go higher and higher! With great cries of glee and many pleadings to "Look at me Buppa" "Look at me Amma" she flew through the air with the greatest of ease, the daring young girl on the... well you get the picture.

Speaking of picture. She was so animated that AC ran for the camera to take a video. Wouldn't you know that as soon as the video camera was turned on she wouldn't say a word - the scamp! We turned the camera off and just enjoyed watching her have so much fun. At one point she started singing and then blurted out "I LOVE it"

Although she didn't utter a word during the whole video I thought you might enjoy seeing it anyway.

Lorna - Good! She makes me laugh too.

Bernie - She is such a scamp!