Daddy helped Smudge make this card for Mommy for Christmas. It has Smudge's picture on the front, and when you open it up it has her talking, then it plays some Christmas music. 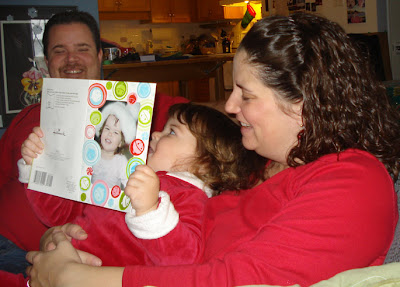 It took Daddy hours and hours to get Smudge's voice recorded. Every time he set it up she would be VERY QUIET and not chatter at all. Then when he would try to cue it up again, she would chatter away until he pushed the record button, then total silence. We all got a chuckle out of that. Smudge loved the finished card though and was quite taken with the fact that it played music when she opened it.

Here is a short video of her carrying the card around and dancing to the music.

Hahaa..I love the little wiggle she does in the very first of the clip! Hope your Christmas was wonderful! Happy New Year!hughugs

How absolutely adorable! She gets cuter by the day, if that is possible...